Advertising executive Paul Manning has closed the door on a lucrative role as the managing director of one of the nation's major ad agencies to take what is essentially a $5 million bet on a local industry that doesn't yet exist.

To follow is as excerpt from the cover story in the New Zealand Herald business section by Damien Venuto. You can read the original article here.

Leaving behind a staff of more than 100 employees at established ad business 99, Manning has walked into uncertain territory as he joins two other local entrepreneurs - Gavin Pook and JP Schmidt - at a little-known cannabis start-up called Helius Therapeutics.

Like Manning, the other two owners also come off the back of successful business careers, with Pook leading Red Bull New Zealand for five years and Schmidt working in the private equity and property investment space for years before committing to this challenge fulltime.

"We've all given up salaries and high-paying positions to do this and we're putting skin in the game" Manning tells the Weekend Herald.

"It's incredibly scary leaving the comfort of an amazing job as the managing director of one of the largest advertising agencies in the country. It's a lot to give up, but it's as exciting as it is scary. And, as they say, 'no guts, no glory'."

Adding further support to the team is the only international partner Matthew Rhoden, who, having founded and operated several medicinal cannabis businesses in the United States, will lend his experience, specialist knowledge and intellectual property to the local trio.

Although cannabis is often associated with the image of a care-free hippies living off the land, Manning stressed that legitimacy in the industry doesn't come cheap.

"The barriers to entry for a business forming and coming into this space as Helius are incredibly high," said Manning, who last year celebrated his 40th birthday.

"You're talking north of $5 million just to create the facility before you even get under way with any cultivation."

A major contributing factor to this expense is Helius' objective to attain Good Manufacturing Practice (GMP) certification, which is recognised as the international gold standard in the development of food and medical products.

Deloitte NZ is in the process of managing the capital raise for the company, looking first for local investors before potentially taking the search international. "It's quite a capital-intensive business, but given the potential commercial returns in this space, it could be quite an incredible opportunity."

Based on the Ministry of Health's estimate that 235,000 New Zealanders currently use cannabis for medicinal purposes, Manning estimates the local market to be worth a billion dollars before exporting is even taken into account. However, that opportunity doesn't come without its risks. And what makes it particularly precarious is the fact that Helius - or any company for that matter - is yet to acquire a licence to cultivate medicinal cannabis in New Zealand.

Manning's company is currently one of six applicants being reviewed by the Ministry of Health for a licence to engage in the cultivation, research and testing of medicinal cannabis in New Zealand.

In February this year, the Labour Government's Misuse of Drugs Amendment Bill was unanimously passed to select committee, which is due to report on July 30, 2018. This bill aims to amend the disconnect in current legislation and allow locally produced medicinal cannabis to be sold in New Zealand to qualifying patients.

"We know that the prohibition will end," says Manning.

Without this amendment, New Zealanders would have to continue to rely on the importation of cannabinoid products, largely from the UK and Canada at an enormous cost.

Restrictions on local production are also cutting New Zealand out of a legal global cannabis market, which is projected to be worth $87.8b by 2024. Meanwhile, organisations in North America and Europe are benefiting from relaxed legislation, allowing for the development of multimillion-dollar enterprises, such as Canada's Canopy Growth, which is already establishing a dominant footprint in the international market. Closer to home, Australian Health Minister Greg Hunt has also outlined plans to make the country the world's top medicinal cannabis supplier. All this while the local market waits for the first production licence to be issued.

The reliance on imports also has the corollary effect of pushing up prices to prohibitive levels in the local market. And because cannabis products aren't government subsidised, many legitimate patients have been pushed into the black market - which, Manning argues, is not only criminal but also dangerous.

"Prohibition is causing one in 20 New Zealanders to purchase cannabis from criminals for medicinal purposes," says Manning. "These [black market] cannabis products are often grown goodness knows where, potentially laden with pesticides and controlled by a gang," he says. 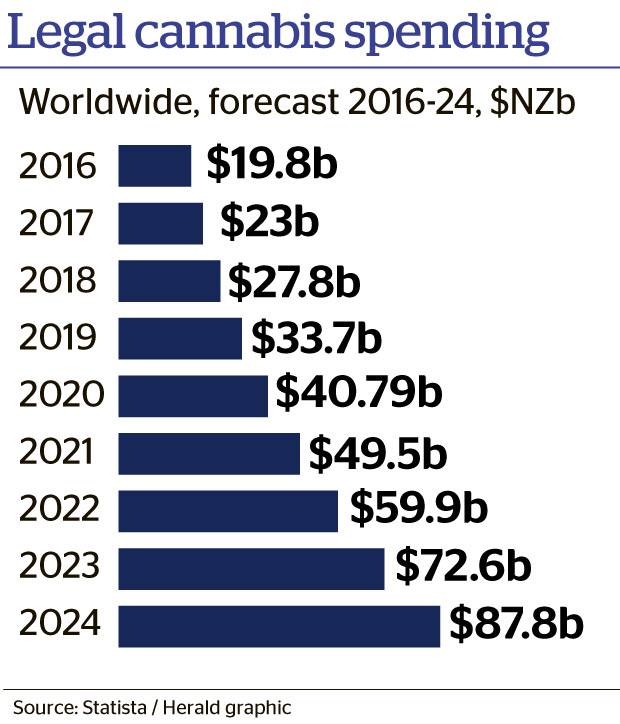 Manning says that through regulation, quality controls can be set up to ensure the products are produced legally and are safe for consumption.

Research in the local market will also open the door to the development of homegrown products, such as oils and ointments, for patients who may not want to smoke the product. Through its partnership with Rhoden, Helius already has access to the IP for topical creams for arthritis and burns as well as a yet-to-be-released treatment for skin cancer currently going through testing.

In its submission to the select committee, Helius is calling on government to make GMP certification mandatory and to impose strict sanctions on producers that don't follow the legislative guidelines.

The company also recommends the adoption of seed-to-sale tracking biotechnology that would allow producers and law enforcement to track any product on the market back to the source.

"In the event the product ends up in the wrong hands, they'd be able to scan that product and identify which local producer it came from," Manning says.

Speaking with the fatigue of someone who has heard one too many weed jokes, Manning says strict control is vital in legitimising the industry.

"Cannabis has to move out of the shadows into a legitimate space. Which means there's a significant job to be done in normalising these products for New Zealanders."

Manning describes it as a "start-up business in a start-up industry," saying he has never faced a challenge like this in his career.

"The only thing you can compare this to is probably the prohibition back in the 1930s."

As the shadow of prohibition receded, it allowed for the emergence of one of the most profitable markets in the world. Now, Manning and his team at Helius are banking on history repeating itself.

New phase for Helius as David Darling joins board